Hailing from Shangai, this dish is thus named because of how it resembles one when the cabbage surrounds the large meat balls.  My mother used to cook this a lot when I was a kid, and I haven’t had it in a long time.  So after waking up to 2 feet of fresh fallen snow, today was the best kind of day for this chinese comfort dish.  it is commonly served with glass noodles, but I chose to exclude them.  For noodles, just prepare them separately and add them to the stew while it simmers.

the result belies the simplicity of preparation and cooking

1 medium head of nappa cabbage; stems separated from leaves an cut into thirds

the “soup” and pork juices get soaked right up by the nappa cabbage, making them have a savory crunch.  you’ll be left with a lot of extra soup, usually restaurants don’t serve the dish with a lot of it and typically its left remaining in the pot, but there was just so much meaty flavor in it, i could’t just toss it.  store it and mix with rice and all that excess nappa cabbage (if you happen to have any!) and you’ve got yourself another couple of meals! 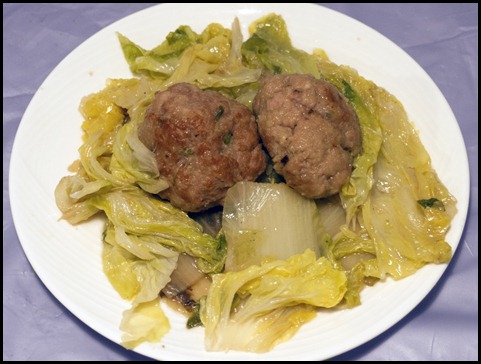