this place gets a good rap from chowhounder’s and yelpers, so we decided to give it a go (and avoid the craziness that is Pacific Mall).

We got food from two places

This seemed to be the most “foreign” (non oriental) joint in the food court, and I’ never had malay thai food before, or malay for that matter, so we ordered three dishes from there.

It was different than the ones I’ve had before, in Thai restaurants and in Singapore, where the rice wasn’t as sticky an the chicken itself was more moist an tender.  The flavoring was a bit different too, more sour seasoning in it (not sure, could be lemongrass?).  It was a nice twist to the traditional hainan chicken rice and still kept all the good traits of the original.  Good portions and the fresh cucumbers and tomatoes were a good mouth refresher.  The sauce was superb, definitely became a neccessity after a first taste.

I’ve never seen or heard of this dish before, so I didn’t know what to expect.  What I got was a HUGE bowl of three different kinds of noodle, thin glass noodles, thick chow mein noodles and northern style shanghai noodles.  It was topped with a couple pieces of chicken, fried tofu slices and potato chunks.  The soup was a a brothy curry, with an emphasis on a coconut milk.  Definitely could’ve fed two hungry people.  Never had something like this before, but it wasn’t as good as the other dishes we ordered.  Curry soup could’ve done with a bit more curry seasoning.

This was by far the BEST dish of the meal.  The roti were soft fried pieces of flat bread, a cross between chinese green onion pancake and indian naan bread (what a marvelous combo!).  The curry was packed with flavor and the chicken bits were tender and moist.  Dipping the roti in the curry sauce was amazing, an rolling up the chicken pieces in larger pieces of the roti became another food experience in itself.

The orders all came with a cup of cold sweet barley tea which was perfect to drink post curry-spice to cool down and refresh the mouth and throat.

a literal hole in the wall, the prices were reasonable (around $7 per order), portions were generous and food was lip-smacking delicious. 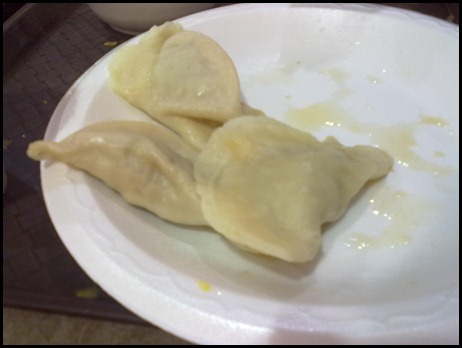 These dumplings had a thicker skin than standard restaurant-style dumplings.  They were generously filled with a more savory filling, we guessed that they added soy sauce and more sesame oil.  Very homey feeling dumplings, dumplings your chinese wrinkled grandmother would make for you to take to lunch the next day.

Oh and can’t forget this 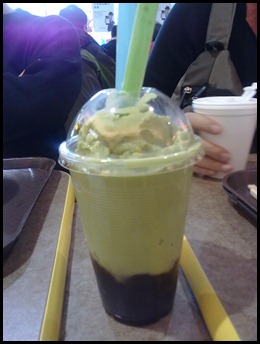 the absolute BEST red bean drink I’ve had in a VERY long time.  Chunky non-processed red beans on the bottom with a green tea creamy almost ice cream-like slush on the top.  From the tea shop at the very end on the right (forgot the name!)

Best food court I’ve been to in a while, every restaurant looks like they serve at least decent and definitely authentic ethnic cuisine.  The place we tried were superb as far as food court food goes, and are definitely places we will visit again next time.